It was on a bright but chilly Friday afternoon that we found ourselves in a light industrial park in the village of Aalten in the east of the Netherlands, close to the German border.

We are here as guests of Dutch Pinball to see Ara, the manufacturing company chosen to build their The Big Lebowski pinball, and to show you what we saw.

Ara is formed from a group of smaller companies each specialising in a different part of the manufacturing process, and we began our visit in one of their office buildings across the street from the factory.

Inside, four The Big Lebowski prototype machines were set up for guests to enjoy, along with hot and cold drinks, a commemorative cake, a Dutch apple pie, and plenty of stroopwafels.

Once everyone was assembled, Jaap Nauta from Dutch Pinball welcomed them and explained the schedule for the rest of the day.

Then Walter te Brake from Ara spoke about the manufacturing process, how the factory is laid out, and how the various parts will be brought together to make a complete game.

You can watch Walter’s presentation in this video shot by Rens Hooijmaijers.

Then the tour of the Ara facility began, starting with the design studio which is located in the same office block.

Then it was time to cross the street and explore the factory where the games will be built.

Guests were split into two groups where, as a courtesy to non-Dutch speakers, one tour was conducted in English.

The right-hand side of the factory deals with metal cutting, bending and fabrication, while the left side handles the electrical and electronic manufacturing and construction. We began in the metal working area on the right.

Although this area deals with cutting, welding, smoothing and bending of metals, it was remarkably clean.

Before they are formed into the correct shape, the metal parts begin as a flat sheet of metal which is then laser-cut and perforated.

These two Trumatic 600L laser cutter both feature 6KW lasers and an array of drilling or punching bits to produce the metal pieces you saw above.

Another Ara building a little further up the street provides powder coating for those metal parts which need it. Meanwhile, we moved into the other half of the factory where the electrical and electronic work is undertaken.

Ara operates a ‘lean production’ method where assemblies are either created or delivered as needed, just in time for them to be incorporated into the finished product. That means they don’t need to hold large quantities of stock for the assembly process, although our guide, Erik Wildenbeest, said that under EU law they are required to make replacement parts available for ten years after the product is manufactured.

That said, some parts brought in from overseas needed to be sent in larger quantities and kept in the factory.

The cabinet and backbox assembly areas were a short distance away.

On the side of the factory furthest from the metalworking area is the section where the electronics are built and tested. The whole area is highly static-sensitive, so special clothing has to be worn and the floor is conductive to help prevent any static discharges.

Ara takes electronic components, inserts them into printed circuit boards, solders them, tests them and then installs them in their products. The components come either on reels or in easy-to-pick containers.

Once cooled, the boards go through a testing phase where all the functions are checked. There is also a stress-testing room where boards are operated an extreme high or low temperatures to determine their safe operating range.

Then we come to the playfield assembly area.

It’s important to note here that all the machines shown in this article are prototypes of one kind or another, even the games set up for guests to play. Numerous small changes are being made to the hardware, and some, all, or none of them are incorporated in the machines you see here.

We will, however, point out a few of the more obvious cosmetic changes a little later.

There are some interesting features under the playfield.

Two large PCBs cover most of the surface. These contain the surface-mount LEDs to illuminate the inserts, as well as power distribution for the 48V used to drive the solenoids.

The MOSFETs which drive the solenoids are mounted in various groups across both boards, but there is quite a bit of redundancy, with extra MOSFETs available in case any of the original ones fail. If that happens, a solenoid can be plugged into an adjacent output and the software told to use a different driver for that coil.

The 48V DC used for the coils comes from a switching power supply in the backbox. These are great for constant, steady current draws, but could struggle when dealing with sudden increases in current draw, such as when a flipper flips.

So there is an extra 10,000uF capacitor mounted on the front PCB which is dedicated to the flippers’ 48V feed to provide extra power when it is needed.

The playfield’s features are run by the P3-ROC pinball control system made by Pinball Controllers. The P3-ROC board plugs into the larger of the two under-playfield PCBs, where it interfaces with the solenoid drivers, switch inputs and LED controllers.

Although the solenoid drivers are on the main PCB, driving the LEDs is handled by another Pinball Controllers daughter-board, the PD-LED. There are two of these under the playfield, each one capable of controlling up to 84 individual LEDs or 24 RGB LEDs, providing solid, flashing and fading effects.

Next to the P3-ROC on the main PCB are a couple of downward-facing RGB LEDs which are used to illuminate the bowling alley mechanism.

If there’s been one major growth area in home pinball over the past few years it has been add-on mods – either home grown, from third parties, or even manufacturer supplied.

In recognition of this, and to provide a better, more official means to add them, Dutch Pinball has provided a dedicated mods header, although it comes with a use-at-your-own-risk warning.

Here’s an overview of the whole playfield.

Then it’s over to the backboxes.

Inside the backbox we have five modules. Starting at the top left there is an ASRock Q1900-ITX mini-ITX PC mainboard, containing a passively-cooled Intel Celeron processor and built-in graphics.

The mainboard connects to the P3-ROC controller board under the playfield, and between them they run the whole game, with the P3-ROC driving the solenoids and LEDs, and reading the switches, while the PC generates the display animations, triggers the sounds, and runs the game’s ruleset.

Power for the mainboard and various other boards comes from a Cooler Master G550M ATX power supply mounted next to the mainboard. This contains a variable-speed 120mm fan which, while quiet, will most-likely produce a little noise which might be audible when the game is inactive.

To the right of the ATX PSU is the Mean Well RSP-500-48 passively-cooled switching power supply, which provides the 48V for the coils at a maximum of 10.5A.

The mainboard, ATX power supply and the 48V supply are all stock parts, but at the bottom left is a custom sound board and amplifier.

The sound board connects via USB to the mainboard and acts like any other external sound card. There are four outputs – two to the speaker panel speakers, and two for the bass speaker we saw earlier. 12V power for the board comes from the AX power supply.

We said there were five devices, and the fifth is an SSD drive containing the game code, the Linux operating system – earlier prototype games used Windows, but the transition has now been made to Linux – and all the video or audio assets.

The speaker panel contains a pair of wide-range speakers, but the panel is dominated by the large LCD display.

This is a custom-made display, which means it is exactly the right size, with no overhang. The top two-thirds is covered by deep metal box which contains the electronics and controls to adjust the brightness and contrast. The display is fed from the VGA output of the mainboard.

Power for the game comes in at the rear of the backbox, with the main power switch under the right-bottom corner, just like Stern’s Spike system.

One thing you may have noticed is any backlighting for the game’s translite. That’s because the translite is edge-lit from the bottom by a single row of white LEDs which mounts in the bottom plastic channel.

A special backing distributes the light evenly across the translite. It works very well, although inevitably there is a slight pattern of darkening at the very bottom between the individual LEDs. However, this is quite well hidden by the rug pattern.

The tour ended with the prototype playfields, as the guests returned to the offices across the street to play some more and toast an enjoyable and informative tour.

A hot meal was also provided as the event continued into the evening.

We mentioned earlier how there had been a few changes on the playfield. There is a new car model which is an accurate match for the one depicted in the playfield artwork.

The ball bowler’s return lane which was previously a printed plastic is now real metal.

One of the darkest areas of the game has always been the rug. This is now much brighter thanks to a dedicated spotlight.

The rug mechanism has also been redesigned to make it more sensitive to ball hits.

One other lighting change makes a dramatic difference. Earlier games had 3 SMD LED devices for general illumination which, while bright, weren’t so effective at dispersing light in all directions.

The game now uses white LEDs on the large circuit boards below the playfield, and a new style of ‘light pipe’ which site on top of the LED and transmits the light through the playfield and radiates it evenly. The top of the light pipe is frosted and domed, with a slight flange to hold it in its playfield hole, making it the same shape as a traditional LED.

And that brings us to the end of this report from the Dutch Pinball/Ara factory tour. 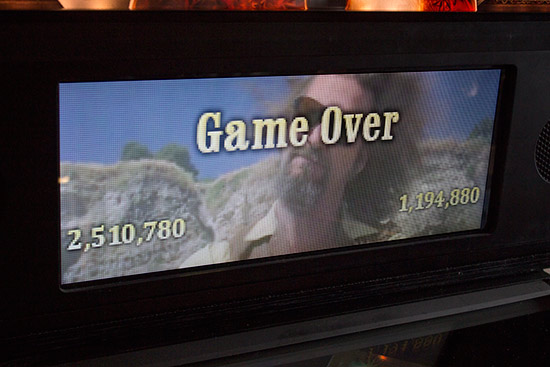 We will leave you with a look at some of the new display animations in this five minute video.