On July 6, 7 and 8, 2017, over 2,000 people converged at the crossroads of New England, USA to experience the region’s only major pinball exposition, the Pintastic Pinball and Game Room Expo. 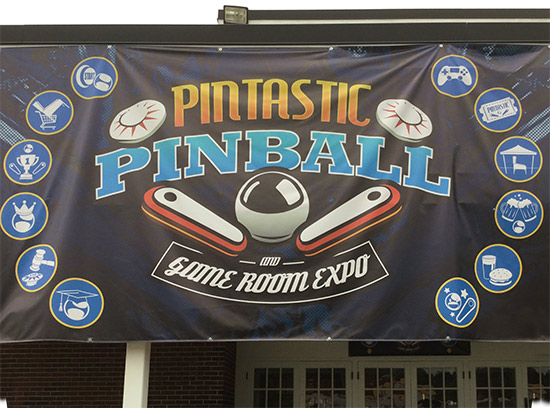 Each facet of the show is represented by an icon 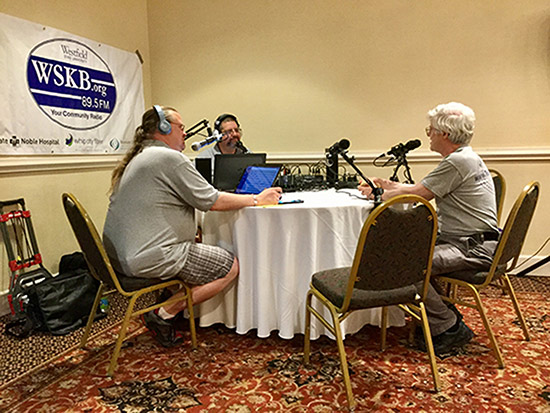 Back for its third year in 2017 at the only lakeside venue in Sturbridge, Massachusetts, the Sturbridge Host Hotel and Conference Center, Pintastic featured over 200 pinball machines from the 1950s right up to this year’s new releases, including the world premiere of the highly-anticipated Star Wars machine from Stern Pinball! 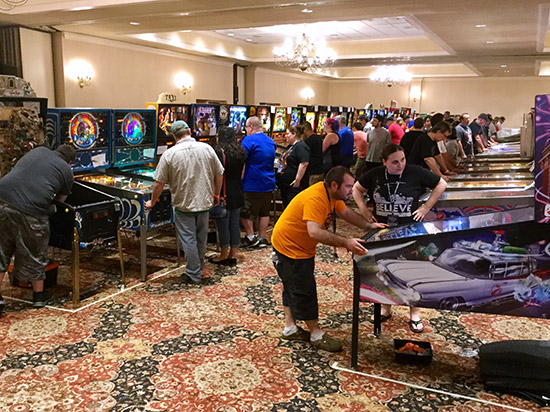 There were many hard-to- find games, sometimes even in duplicate 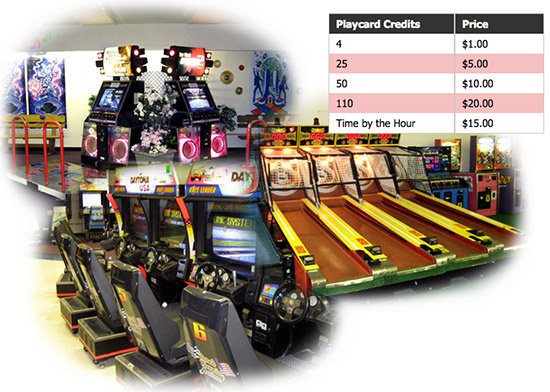 New England band Aerosmith had to be represented at a New England show
while in the background, the booth where buyers could get at-show financing 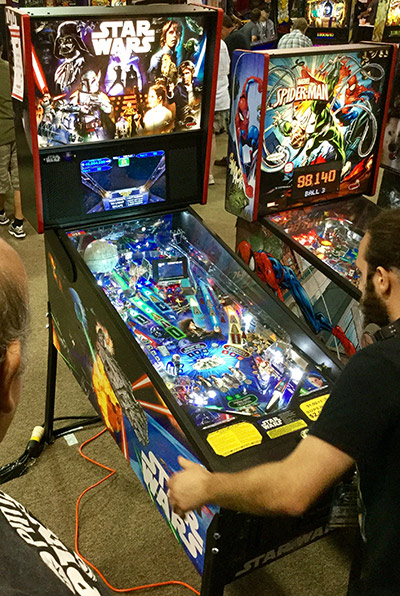 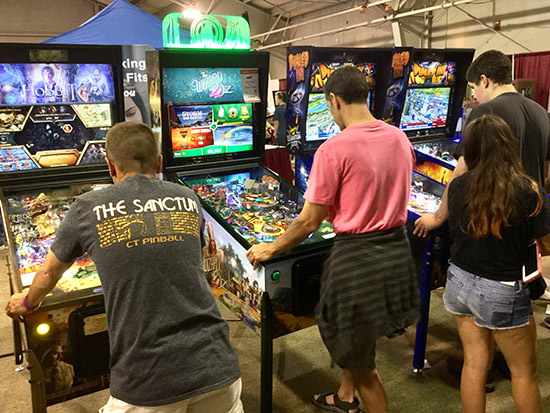 There were several Dialed In! games, both Pro and Limited Edition 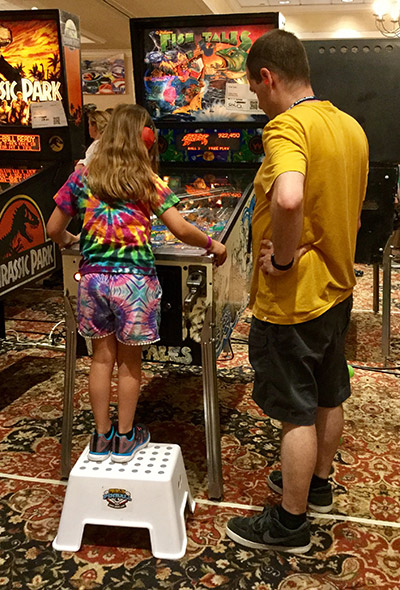 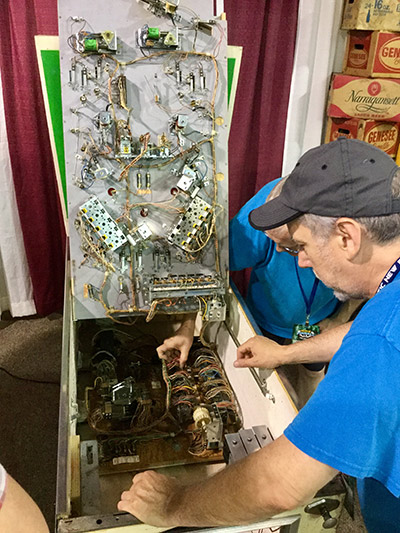 There were technicians in abundance. Can you identify this game? 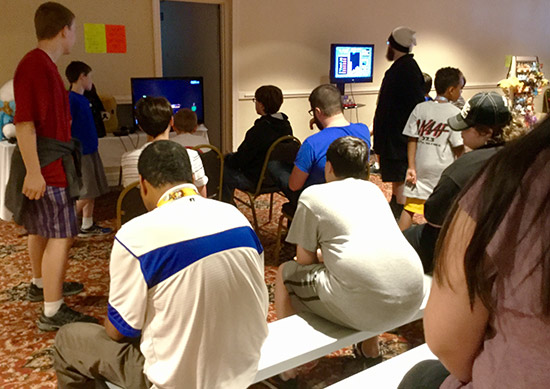 Not all games were coin-op 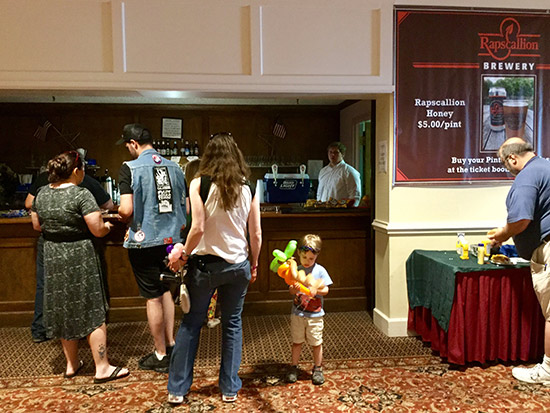 Enthusiastic guests and collectors delighted at the chance to witness over eighty years’ of pinball innovation, as well as classic video games, entertainment for kids, a massive vendor hall featuring the coolest ideas for your home and game room, pinball and video game tournaments for adults and kids, pinball machine auctions, an outdoor flea market in strolling distance of Cedar Lake, as well as informative seminars and lively entertainment, all in one convenient and well-equipped venue. 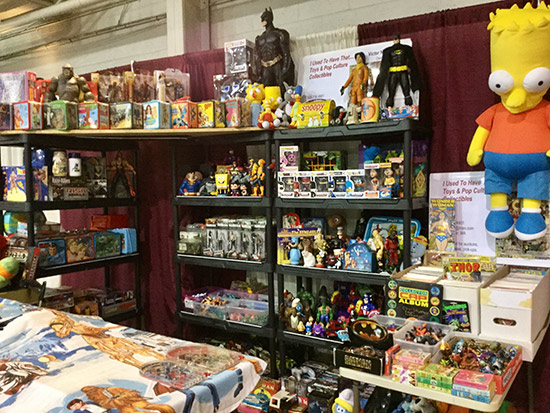 There were some vendors selling pop culture items 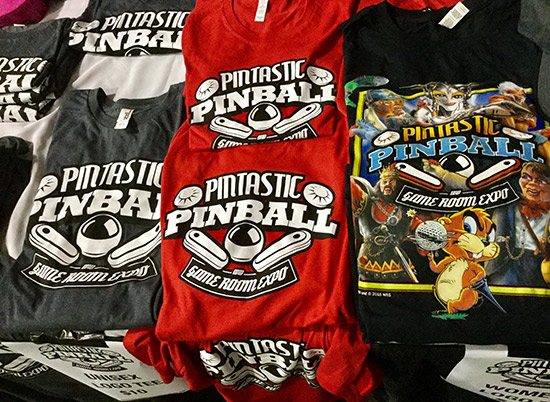 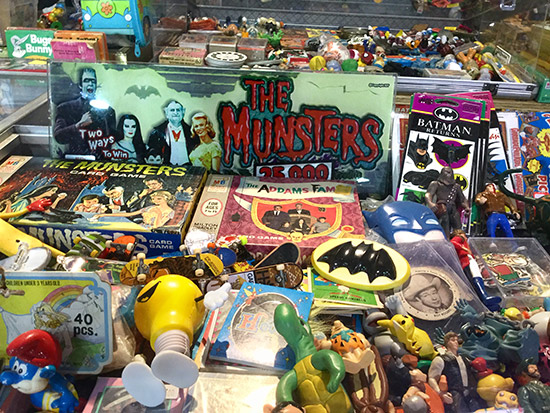 There were re-themed games at the show,
and the ingredients to start your own re-theme 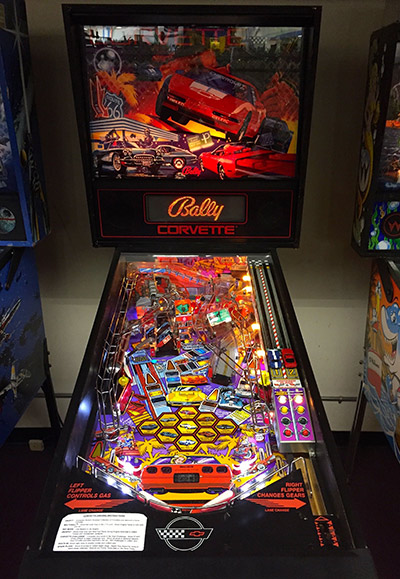 PinBox 3000 kits were for sale at the Cardboard Teck booth 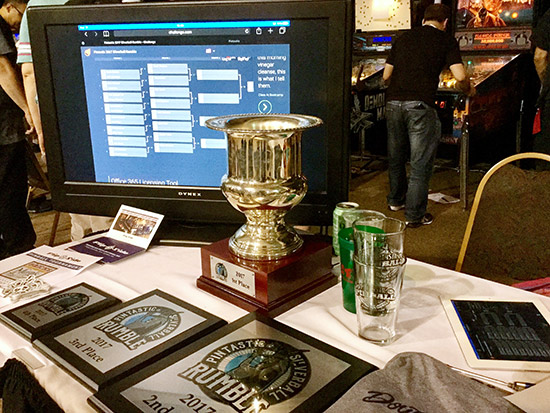 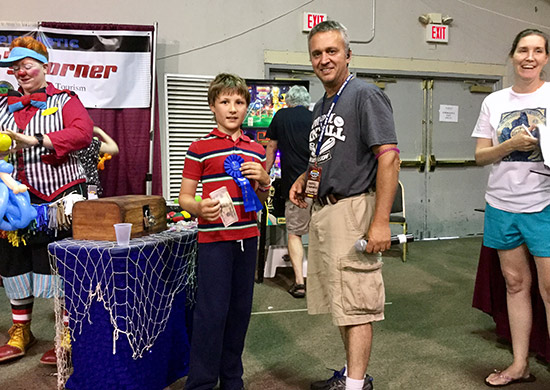 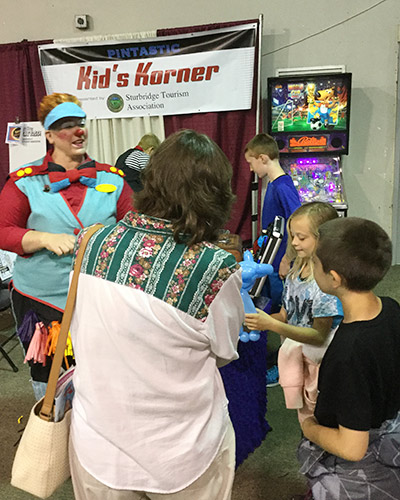 Entertainers were brought in to broaden the family appeal 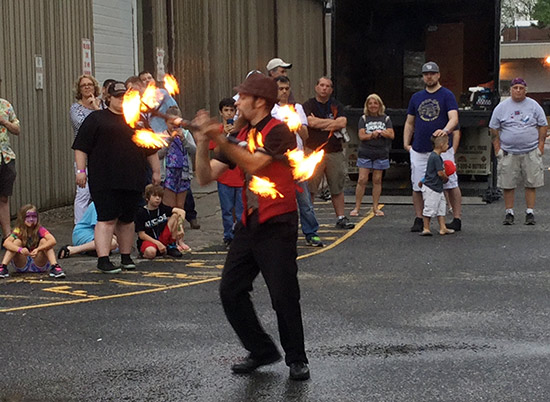 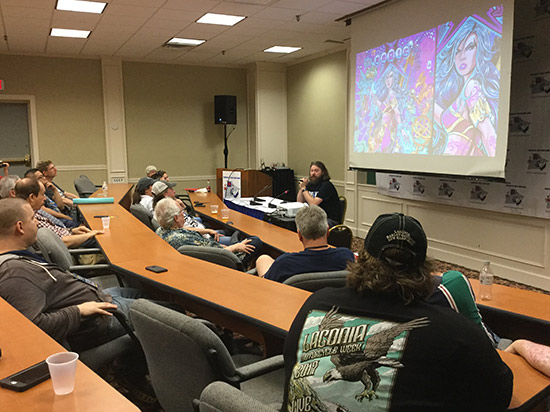 Todd Tuckey makes a rare visit to a distant pinball show
– his seminar included many video clips, of course 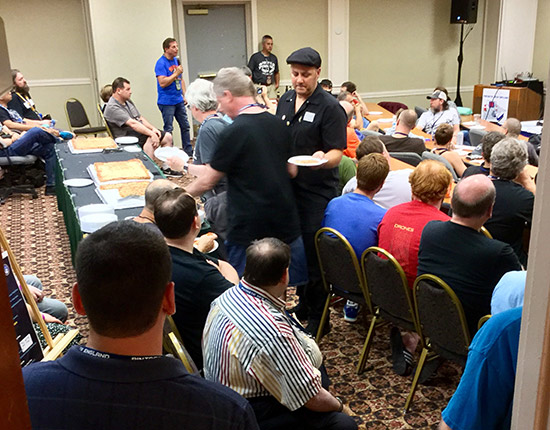 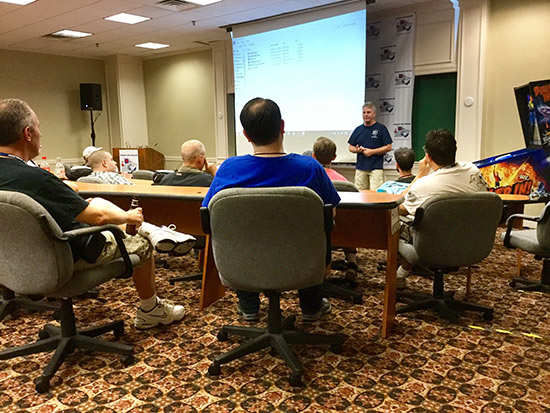 Butch Peel of Jersey Jack Pinball gave a seminar on Dialed In! that included
holding a video camera inside the game 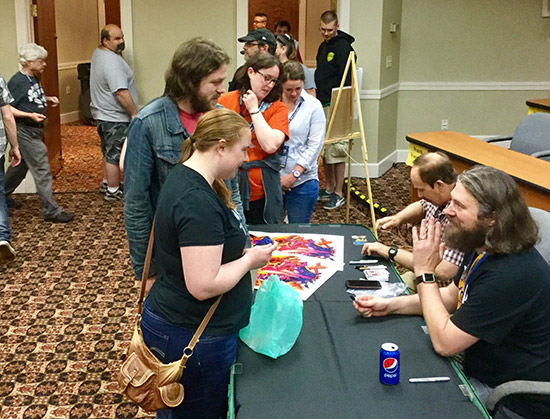 Barry Oursler and Jeremy Packer start the autograph session.
The poster on the table was done by Packer for the Pintastic show

Pintastic and its guests also supported several charities during the event including the Worcester County Food Bank, Project Pinball, The 200 Foundation, and The Andrea Ritz Clinics of Paraguay through a charity auction and several games set up for paid play. 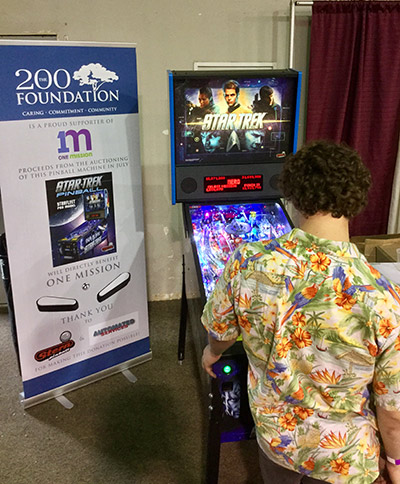 Money was raised for several charities, including an auction of this donated machine 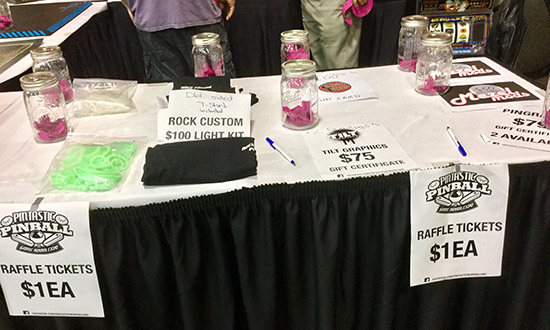 There was a pick-your- prize raffle

Folks at this year’s show were particularly excited to get their flipping fingers on Stern’s new Aerosmith table, the John Trudeau-designed Ghostbusters, Pat Lawlor’s Dialed In! from Jersey Jack and of course, the belle of the ball was Stern’s new Star Wars table! 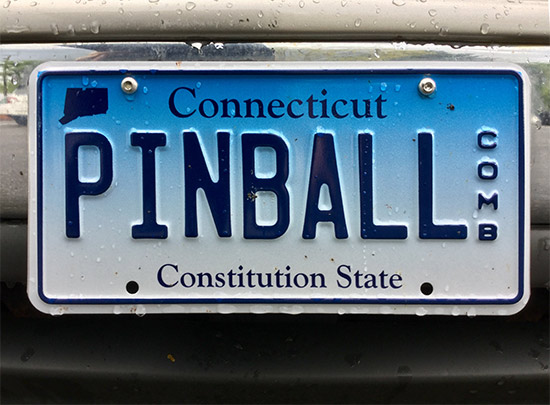 Visitors came from the six New England states and well beyond

Stay tuned for next year’s dates coming soon and visit the website Pintastic at pintasticnewengland.com.

It had been three years since the previous Swavesey Pinball Weekend could take place, but …