“One of the best bars in the U.S.” – Esquire Magazine

Manuel’s reminds me of how neighborhood bars used to be in the heartland of America; a visitor can find, at any given time, a broad cross-section of American culture rubbing elbows, discussing the news item of the day, arguing the merits of a particular sports team, or supporting the idea of the century. 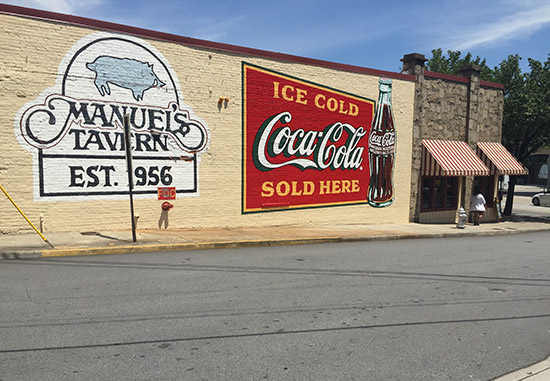 The exterior of Manuel’s Tavern

I found the waitstaff to be friendly and attentive as needed, but not overly so. The selection of beers and other refreshments should satisfy anyone’s needs and I felt that the menu is outstanding. 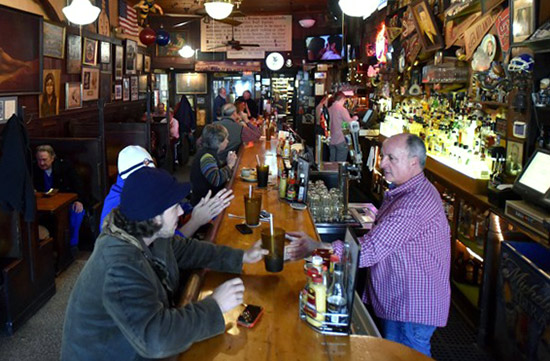 Manuel’s has been in the same location in Atlanta Midtown since 1956 – the owner modeled it on the taverns he had visited while stationed in England during the second World War. He filled the Tavern with salvaged furnishings – mismatched chairs and tables, booths, lighting fixtures, wall paneling – from grand old homes and stores scheduled for demolition.

Manuel’s recently completed a complete renovation and interior re-construction that kept the most recognizable parts of the classic decor while cleaning up and modernizing the rest.

Just before the six-month renovation, a project was completed to digitize all of the photos, paintings, pennants, etc. on the walls of Manuel’s Tavern. The project brought together Georgia State University, Emory University, Savannah College of Art and Design and the Atlanta Studies Network who worked to preserve the ‘organic archive’ that these items represent. 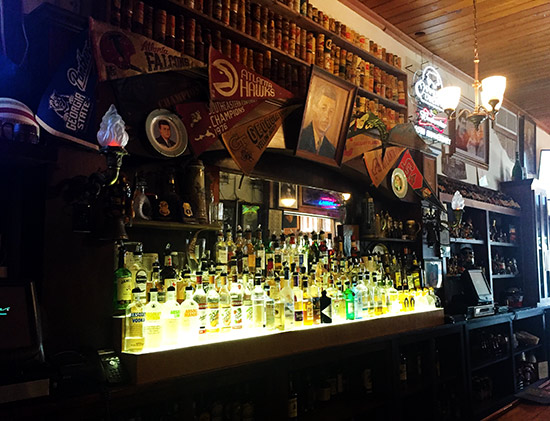 Many items were discovered including an unmarked container above the bar housing the ashes of original owner Manuel Maloof, dusty beer cans, moldering sports pennants, law enforcement uniform patches, snapshots of well-known politicians (including former President Jimmy Carter) and anonymous tipplers, risqué oil paintings traded as payment for ancient tabs and a stuffed rodent, the subject of an inside joke (“Darrel Caudill Memorial Door,” a plaque beneath it reads) that the owners will not spoil. 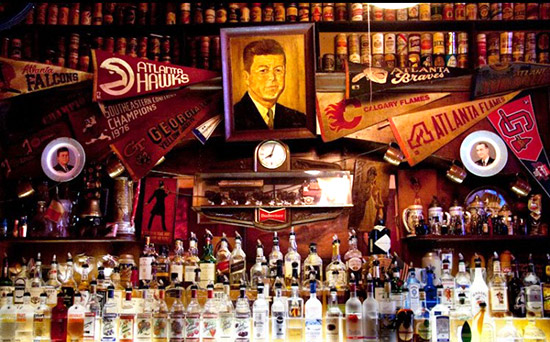 Historical paraphernalia behind the bar

I visited Manuel’s during a weekday lunch hour and ordered their ‘Stadium Dog’ with a side order of fried onion rings. I was asked what I wanted on my hot dog and I said, “everything”, without fully understanding what that meant. ‘Everything’ at Manuel’s means ‘Loaded’ and includes chili, sauerkraut, cheese sauce, coleslaw, chopped onion, pickle spear, relish, and other things that I couldn’t identify. There were so many toppings on the Loaded ‘dog that it couldn’t easily be eaten like a sandwich – it had to be eaten with a knife and fork. 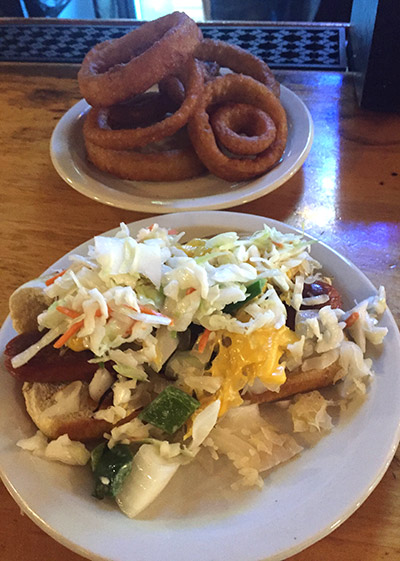 Although I did not have the courage to order it, Manuel’s most popular hot dog is called the Dogzilla. It is a ½lb grilled tube steak on a bakery style roll served with french fried potatoes.

The Dogzilla can be ordered ‘Loaded’ the same as the stadium dog mentioned above. I was told by the bartender that on the typical day Manuel’s serves two miles of hot dogs.

I felt that my lunch with two Pabst Blue Ribbon draft beers (don’t judge) was very reasonably-priced and left lots of change for a generous tip and quarters for the game room. The featured beer when I visited was Prairie Artisan Ales’ Prairie Bomb, which is a 13% ABV decadent descent into coffee, chocolate, and vanilla bean taste sensations. I had a small sample but felt since I was driving it was a bit too potent.

Although I didn’t have a chance to try breakfast at Manuel’s this trip, I was told that their eggs are provided by the free-range chickens that roost on the roof of the tavern.

Manuel’s game room is located to the left of the main entrance near the newly reconstructed washrooms. In the game room is the Golden Tee video game seemingly found in the majority of bars in America, Big Buck Hunter, darts, and two nearly-new and well-maintained pinball games: 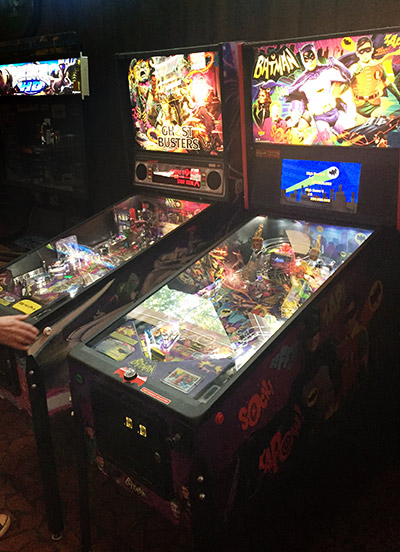 Both are priced at 50 cents per 3-ball game – quarters only. While I was at Manuel’s the Ghostbusters game was in constant use so I played Batman 66; my first time playing this game. 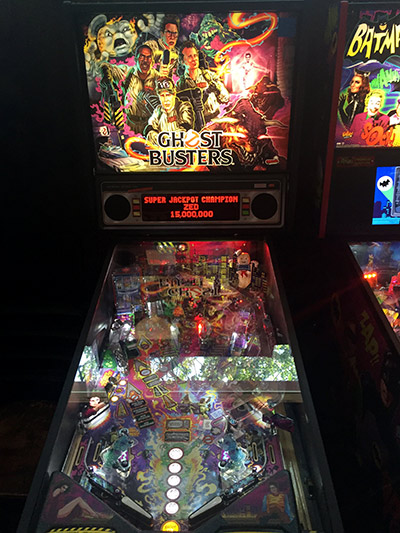 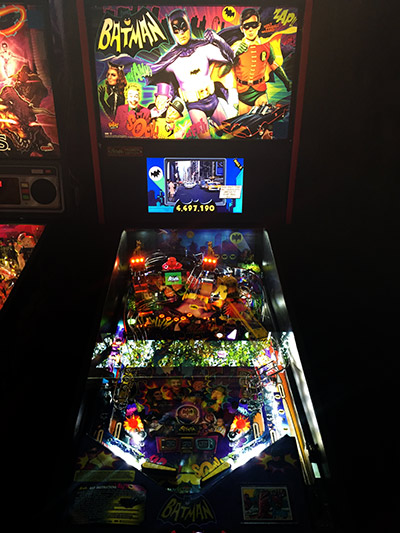 As someone mentioned on the Pinball Map website, the left flipper return spring for the Batman 66 at Manuel’s is either broken or dislodged so that was a bummer. The game is still very playable and I was able to win a game on points my first try. I found the game to be addictive and played quite a few games until the time for my visit had expired. 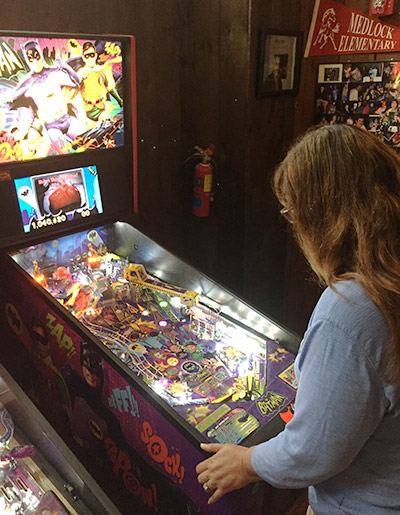 There is no change machine in the game room but the bartenders are happy to change dollars to quarters with a smile if needed.

On weekend nights, certain rooms of Manuel’s Tavern are reserved for board-gamers; including one of the largest Dungeons and Dragons gaming groups in the USA.

Manuel’s Tavern has been a family-run treasure of a working class bar and restaurant with friendly staff and a huge history in the Atlanta community if not the whole of Georgia. Even today Manuel’s is a gathering place for local politicians, blue-collar workers, the press, writers, actors, policemen, and just about anyone else you can imagine. In Manuel’s parking lot there is a prominent sign marking a prime parking space as ‘Clergy Parking Only (Seriously)’. 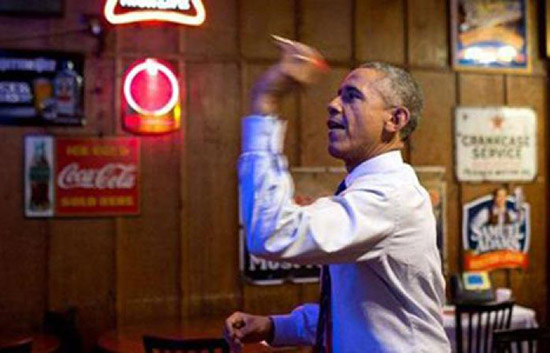 I would encourage you if you are in the Atlanta area to give Manuel’s Tavern a visit- hopefully they will have the left flipper on Batman 66 fixed by then so you can take a shot at the high score.