Game designer John Trudeau has been arrested and charged with two counts of possession of child pornography.

He was arrested by Glendale Heights Police Department on Thursday 24th August, 2017 at his home in Medinah Circle, Glendale Heights – a village around 20 miles west of Chicago –  following the execution of a search warrant.

Trudeau’s name had come to light during a wider child pornography investigation.

According to the Police Department, computer equipment seized during the search contained “numerous computerized files depicting child pornography”.  John Trudeau, aged 69, was present during the search and was subsequently arrested and charged with the two counts, before being taken to DuPage County Jail to await a bail hearing on Friday 25th August, 2017.

His arrest was also reported in the Chicago Sun Times newspaper. 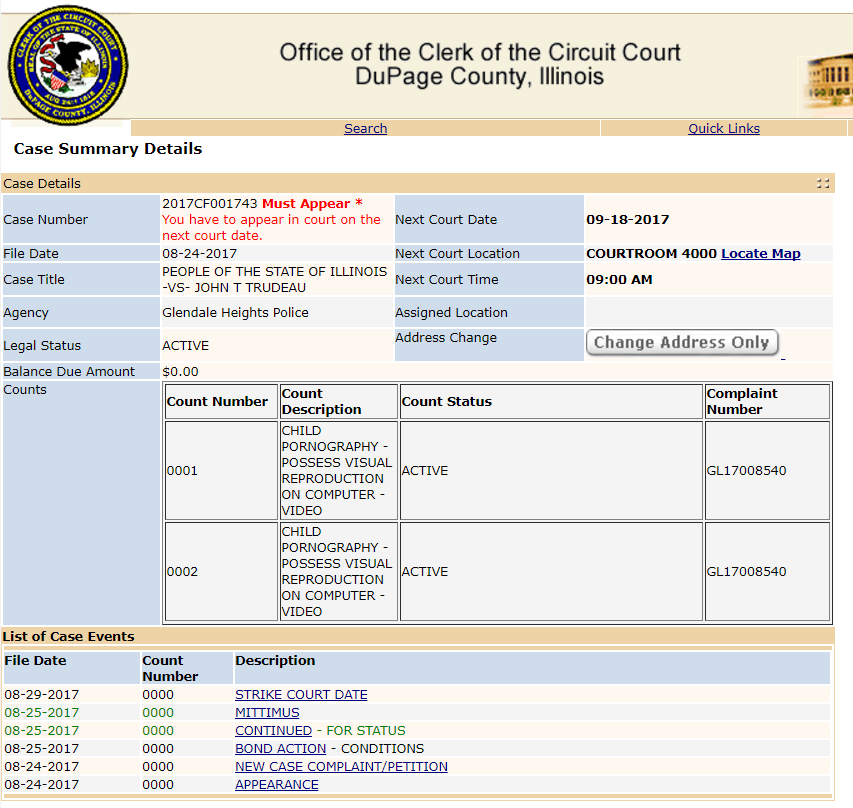 John Trudeau has a long history in pinball game design, designing more than thirty production titles for companies such as Game Plan, Gottlieb, Premier, Williams and is currently employed by Stern Pinball for whom he has designed the games Mustang, WWE Wrestlemania and, most recently, Ghostbusters.  He was believed to be working on his next game for the company which was due for release early next year.

Stern Pinball’s new Director of Marketing, Zach Sharpe, has released a statement on behalf of the company.

He told Pinball News, “It’s unfortunate that a topic such as this is my first formal communication to the community as an official voice of Stern Pinball, but we wanted to address the community about this extremely unfortunate and sensitive situation.  Like the community, we are processing a litany of emotions over the allegations against John Trudeau and he is currently not reporting to Stern Pinball.  Stern Pinball does not support or condone this type of alleged behavior in any capacity and will be donating to Hope For Justice, the premier charity in the fight against human trafficking.”

Note: Moderated comments are enabled for this report (as they are for all our reports).  Commenters are reminded that John Trudeau has only been charged at this stage – he has not been found guilty of anything yet – so no comments which could be libellous or might prejudice a fair trial will be allowed.

On 23rd October, 2017 John Trudeau pleaded not guilty to both of the two charges against him of Child Pornography – Possession of Visual Reproduction on Computer – Video.  The case was heard in front of Judge JJ Kinsella and is now set to go to trial.

In the meantime, the discovery process has begun where the defence can obtain details of the evidence against the defendant from the prosecutors and the prosecutors can demand further information from the defendant.  Once that has been completed and both sides are aware of the evidence, the case may go to trial, a plea bargain may be struck or the case could be dropped.  The next scheduled court date is 20th November, 2017.

In addition, it is understood John Trudeau is no longer an employee of Stern Pinball following his acceptance of a severance deal.

The wheels of justice roll slowly.  There was a court hearding secheduled for 20th November 2017, but the case has been ‘continued’ until 11th January 2018.  That means the case carries on with no change to either the prosecution or defence positions at this stage.  This could be due to the nature of the discovery and the time needed for preparation of the prosecution and defence cases, or it could be because the court workload means they would not be able to hear the case for at least another eight weeks.  Whatever the reason, we wait until the new year for the next schedued hearing, bar any dropping of the case or a negotiated plea bargain being announced.

When the case came before the court on Thursday 11th January it was continued once again to give more time for prosecution and/or defence cases to be completed.  This time though the extension was only for one week, so the case will appear before Judge Kinsella again on 18th January, 2018.  This short continuation – compared to the more than six week extension at the previous hearing – may mean the conclusion of this stage of the process and the start of next stage could be close.  We will keep you informed.

One thing apparently agreed by both sides in this case is the wish for a so-called ‘speedy trial’. A speedy trial is one where the entire process from a trial date being set to a verdict being sought takes a maximum of 160 days, after which the case is automatically dismissed.  If the defendant is kept in custody then that duration is reduced to 120 days, but John Trudeau is out on bail so the 160 days limit applies in this case.

However, the process leading up to that trial has been anything but ‘speedy’, since the defence team can apply or agree to have the clock stopped (or ‘tolled’) if more time is needed.  The ‘speedy trial’ has been tolled three times so far for a total of 49 days.

Since our previous update there have been two more court hearings at the DuPage County Courthouse  – one on 18th and a second on 29th January – neither of which appears to have progressed the case in any significant way.

The hearing on the 18th saw John Trudeau appear in court, but the case was ‘continued’ for a further eleven days with the speedy trial tolled until that next hearing.

At that second hearing the case was again continued, this time to 5th February, 2018 and tolled again.

Without all that tolling, the time to resolve the case would run out on 4th February.  If no further tolling occurs, the case will lapse on 25th March, 2018.

Here’s the list of hearings and outcomes so far in this case, with the most recent at the top:

We will update this report with the outcome of that next hearing and any other developments in the case of the People of the State of Illinois vs John T Trudeau.

A court hearing is moving gradually closer.  A recent hearing made the admonishment (advice) to John Trudeau that, should he fail to appear for the hearing, his trial would continue in his absence.  Giving this warning is a legal requirement to a defendant on bail and doesn’t indicate there is any risk of them not appearing.

In addition, the ‘speedy trial’ request was put on hold again, meaning the clock is still stopped on the 160 days countdown before the case is automatically dismissed.

The next court hearing is scheduled for 5th April at 9am.

Once again, the prospect of a trial has been pushed back by the granting of a continuance (delay), this time following a request by the defence team.

If it takes lomger than expected to gather evidence or get a witness to testify, or if the failure to grant a continuance would lead to the infringements of the defendant’s rights to a fair trial, the judge will typically agree to a delay if either side requests it.  That’s what happened at the hearing on 5th April, 2018, with the next court date set for 7th June, 2018 – nearly ten months since the initial charges were brought in August 2017.

At the same time, the clock continues to be stopped on the speedy trial, the time limit for which would otherwise have expired long ago.

So, we continue to wait for the next court hearing in June, unless there are other updates to report in the meantime in which case you will be able to read all about them here.

On 12th June, a motion was filed for Habeas Corpus.  This fundamental right in American law calls for those responsible for John Trudeau’s detention to bring him to court and to justify his continued incarceration when the Judge in the original case had agreed conditional bail.

The Habeus Corpus order was granted by Judge JJ  Kinsella.

The next scheduled appearance in the original case is scheduled for 25th July, 2018, so this is probably when John Trudeau will appear in court in person.

The DuPage County court date set for 25th July arrived, but with the additional and more serious charges in Will County taking priority, there was no progress towards resolving the two charges of possession of videos of child pornography.

The case was ‘continued’ until the next hearing on 27th August, 2018 by agreement with both sides, with the speedy trial clock still on hold. There was also a miscellaneous order made, the details of which have not been made public but might possibly relate to the precedence and jurisdictions now that John Trudeau is facing seven charges spread across two separate cases, each in different court districts.

The next scheduled hearing will take place just a shade over one year since he was initially arrested on these first two charges.

The most recent hearing was on 27th August when little visible progress was made towards resolving the charges against John Trudeau.

There was a motion to refund the bond under which Trudeau was released, and an order made to make that refund, presumably on the basis that the defendant is now being held in jail and that any outstanding court and legal costs had been paid. 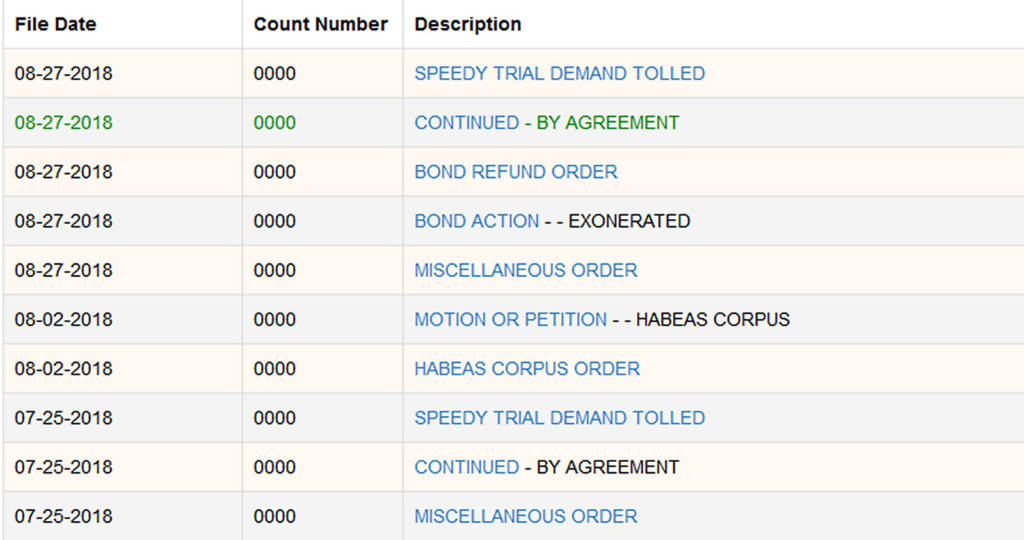 As we have seen many times before, the clock on a so-called ‘speedy trial’ was tolled (i.e. stopped) and the proceedings towards a trial continue with agreement from both sides.  This extends the same orders made earlier in the month at a hearing and appearance by the defendant on 2nd August.

The next court hearing is scheduled for 18th October, 2018.

We will update this report after the next hearing, or earlier if a court appearance or application for additional motions takes place.

The case has now been concluded with a guilty plea on stipulation of facts.  You can read all about the outcome and the sentence in our report here.

Wayne Neyens, the most prolific pinball designer of all time, has died just one day after …